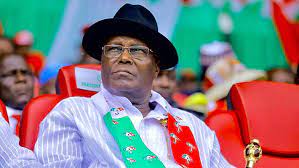 Former Vice President Atiku Abubakar has come under serious criticism by his tweeps over his post on twitter describing Murtala Mohammed as “a real Nigerian hero.”

The former Presidential candidate of the Peoples Democratic Party, PDP in 2019 general election had while commemorating the death of the former head of state, forty six years ago opined that:

“Forty six years ago, we lost a real Nigerian hero. A man who gave so much to this nation, and paid the supreme price for the love of Nigeria.

“I remember the great pride and patriotism Nigerians had after his ‘Africa Has Come of Age’ speech at the Extraordinary Meeting of the Organisation of African Unity in Addis Ababa, on Sunday, January 11, 1976. He saw the future that he never got to live in.

“Murtala Mohammed was in a hurry to develop Nigeria and in his determined progressivism, he planted trees, whose shades he never lived to enjoy, including the new Federal Capital Territory, Abuja, the Indigenisation policy, which increased the participation of Nigerians in their own economy, and the purest, objective and most effective fight against corruption that this clime has ever seen.

However, Atiku’s position didn’t sit down well with some of his followers that maintained that Murtala was a “war criminal” that shouldn’t be celebrated.

Nigerians chanting ” One Nigeria” were murdered by that war criminal for nothing.

He is a war criminal, not a National hero.

Not shocked that Atiku praises a war criminal.

I mean, he couldn’t even talk when Pantami was exposed as a Terrorist.

Another user, @DavidHundeyin replied Atiku with the tweet: “At this point I’m actually relieved this guy lost in 2019. Let’s kuku manage the werey we have now until 2023. At least Buhari doesn’t disguise who or what he is.