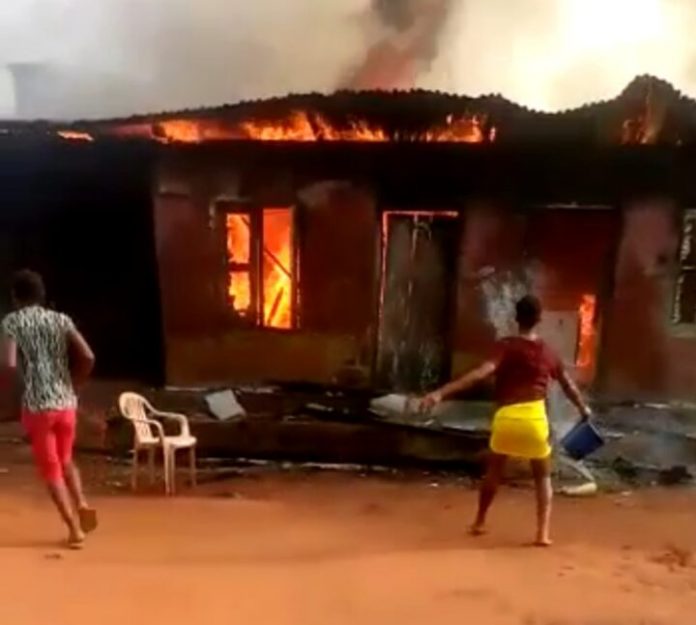 Gunmen alleged to be security operatives have razed the houses of suspected members of the Eastern Security Network (ESN) in Umuonyeoka Ihitteafoukwu and Okponkume communities in Ahiazu Mbaise LGA of Imo, TheCable reports.

According to Emeka Obasi, a resident of Ihitteafoukwu, who spoke with newspaper, the armed men came in seven cars to search for one Uche Madu, who is alleged to be a member of the ESN.

ESN is the armed unit of the Indigenous People of Biafra (IPOB).

He said the armed men descended on the family home of the Madus after the search for the suspect became futile.

Obasi called on the state government to unravel those behind the invasion of Ihitteafoukwu and bring them to justice.

“While I do not condone any indigene of Ihitteafoukwu land to be involved with any unlawful act or criminal activities, it is still pertinent to state that the invasion and arson perpetrated in our land today is highly condemnable and ill-advised” Obasi said.

Another source in Okponkume community said the armed men also razed the house of one Ekene.

He said three other houses in the same compound as Ekene’s house were also set ablaze.

“Unidentified security men came to Okponkume, arrested Ekene and burnt down his house and neighbour’s. It’s believed the security men are after ESN members,” the source said.