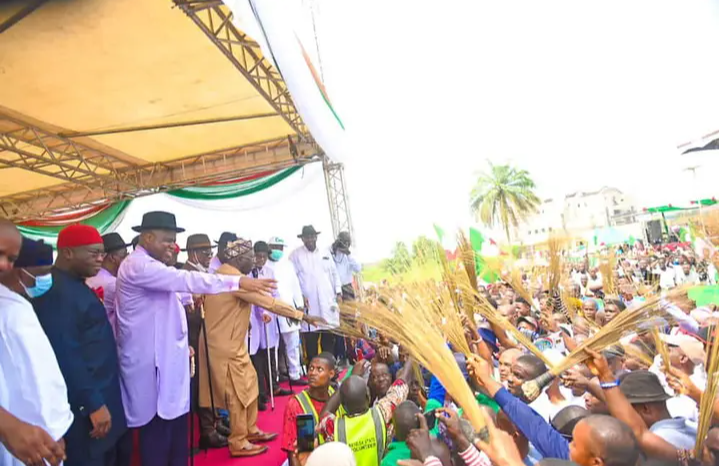 The APC allegedly lost over 5,000 members to the PDP in Bayelsa state at a rally on Tuesday, February 15

Rear Admiral Thomas Lokoson, a former commandant of the National Defence College, and other APC chieftains led their supporters to the PDP

It was  reported that former defence chief defected to the PDP alongside over 5,000 APC chieftains and members.

Atlantic reporters gathered that Lokoson said he returned to the PDP, his former party because of the quality of trust that Governor Douri Diri had demonstrated in his leadership style in the state.

It was learnt that Lokoson and other APC chieftains led over 5,000 of their supporters to return to the PDP during a rally in Yenagoa as part of activities marking Governor Douye Diri’s second year in office on Tuesday, February 15.

They were received by the national chairman of the PDP, Dr Iyorchia Ayu, Diri and other governors elected on the party’s platform at a ceremony held at the Oxbow Lake Pavilion in Yenagoa, the state capital.

Speaking with newsmen after the defection, Lokoson said he had joined the APC from an uninformed position, stressing that he did not get his facts right before making the decision.

Meanwhile, the Bayelsa state governor, Diri, in a previous report called on those who left the opposition party to return.

The governor said that his party, the PDP, has forgiven all those that left the party before now. He stated that that the door was still wide open for them to come back.

Diri made the statement on Wednesday, August 18, 2021, during his speech at the official commissioning of the new PDP secretariat in Yenagoa.