Is There A Tinubu Versus Osinbajo Contest? 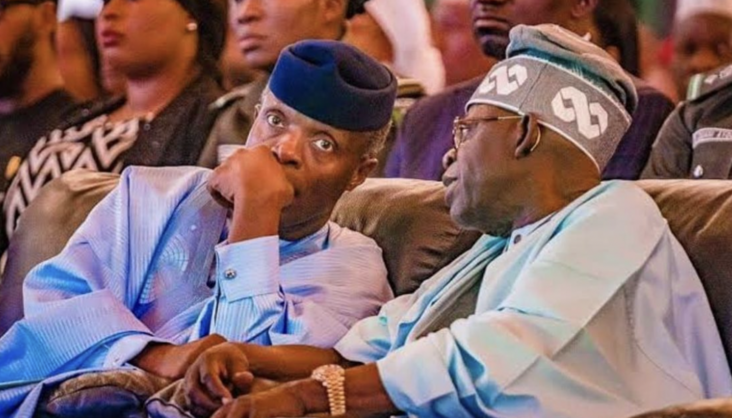 The political space is heating up and supporters of aspirants, as well as fellow journalists, are contributing to it. It’s normal in a pre-election year. Recently, some groups in the South-West said they wouldn’t interfere in the conjectures being made about Senator Bola Tinubu and the Vice President, Yemi Osinbajo, with regard to the 2023 elections. So I ask: Is there a contest between them as yet over who their party’s standard-bearer will be? If there is, I must be the only journalist in town who hasn’t heard about it. And I won’t until all those who are interested in the office of the president say so to Nigerians and embark on their own consultation trips.

Even at that, there are those who make the call that one of the two personalities should leave the stage, offering moral reasons for the call, long before a contest ensues. It’s a featherweight call, the same thought I had when journalists asked Tinubu questions at a press conference about a kingmaker becoming king. The politician gave the appropriate shrug off my shoulder response that time, reminding me of how a certain Ali Modu Sherriff once responded to such questions and then went ahead to be a two-term governor in Borno State. But I repeat my earlier stance that I won’t discuss politicking, particularly as it pertains to the senator and the vice-president.

What I do here is point out what isn’t sound, what cannot be to the benefit of our people and the nation in a debate where it’s argued that a Nigerian shouldn’t contest in a political game that’s open to all. I don’t see the point in this kind of discourse. I can’t in a situation where power must be taken rather than offered. If there’s any discourse at all, it should be to ask all the people who want power to step into the ring, beat other contenders and take it.

Nigerians who say some politicians should bow out have their motives. What I don’t know is if benefits for people and the nation are considered. What’s in it for Nigerians? Something is missed when it’s said that Nigerians who’re keen to occupy an office should disqualify themselves based on some moral argument. With a political science background, and as a keen observer of our politicking, I know the moral argument isn’t one of the best-honoured items in politics and governance. What do people think politics is? Children at play? Even in advanced democracies, political aspirants must engage in the rough fights needed to take power, doing alarmingly strange things under the radar. They glibly talk morality only after the power is firmly in their hands.

See also  On That Hug That Made Tongues Wag

Here, there’s this tendency to talk negatively about people who show ambition to occupy a political office. That has its implications for our people and nation. Now, ambition is right when it’s properly channelled. See, the person who shows ambition to occupy a political office, he’s likely to have mapped out what he wants to do and he’s more than likely to perform. In Nigeria, we hear it said, as though it’s a virtue in itself, that no Nigerian who shows ambition to become the president has ever got it. What we’ve often had were people to whom a few persons handed power. This is what a call that any ambitious Nigerian politician shouldn’t contest for an office is. There’s something impolitic, anti-democratic in a call that an aspirant should bow out before the contest even starts, our people will be the losers on that score.

Right from POL 101 a student of Political Science learns that the candidate, who wins an election, is the one who best symbolises the aspirations of the majority. But a former governorship candidate once told me that politics in practice is different from what I was taught in the classroom. True. But I’ve since concluded that what they mean is that Nigerian politicians have their way of ensuring that nothing works according to the textbook. It’s organised chaos. Of course, the Iya alamala who sits near the voting station and shares money to voters and makes them take oaths will be the first to confidently lecture a Political Science professor as to why what he teaches in the classroom can’t work in reality.

See also  The Masses as Instruments By Abiodun Komolafe

In climes where elections aren’t won by the amount of stomach infrastructure provided but based on issues and policies that a candidate canvasses, he’s the aggregate sum of the will of the majority of voters if he wins. This does something to people and the nation. It builds unity, a sense of belongingness. It reduces tension and tendency towards divisiveness as well as politics of tribe or religion. Why? People listen to a politician’s campaign and they vote for him because he best represents what they believe. In a situation where all who may be interested in the office of the presidency haven’t said so, consult and persuade people that they’re the right persons for the job, I don’t think those who have already made their intentions known are in contest with anyone, let alone be told to bow out. This isn’t a conversation we should be having.

Telling aspirants who step into the ring early that they should bow out means our people won’t get value for a pre-election season such as this one. The pre-election season is the time for politicians to stoop and ask Nigerian voters for support. Let’s hear everyone announce their ambition first, let them make grand promises as usual, then our people will decide who they want. Nigerians mustn’t be denied this right. We’ve had enough of selection of standard-bearers, what we need now is a contest and it’s Nigerians in political parties that should decide not political leaders, supporters of aspirants and everyone else who has a bias for them.

The other point is that the pre- and election seasons are a period when the unity of our nation can be consolidated. There’s dissension across known fault lines. When aspirants come to the public square they announce to the people what they want to do for them. Our people, who have suffered from insurgents, will hear aspirants say how they plan to handle insurgents in the post-Major General Muhammadu Buhari (retd.) era. Aspirants can tell our Igbo brothers and sisters how they want to give them that sense of belonging that they say they lack. Our people in the South-South will hear aspirants say how they intend to ensure that exploration and revenue accruing from crude oil do not continue to be an albatross.

Our people in the North-West want to hear aspirants say how they plan to rescue them from bandits. Nigerians in the South-West want to hear aspirants say how they plan to make Lagos the biggest economy in Africa. When aspirants speak to all, and after a keen contest among them, the majority of our people can vote those they want into office; this way a sense of unity is fostered. Why? Everyone has heard them make promises and they know those who win are the choices they have made. Nigerians mustn’t be denied this right with a call that an aspirant should bow out.

We should be done by now with the era of placing in authority politicians who don’t show ambition. If anyone is interested let them declare and fight to take it. They should speak loud, there should be no ambiguities with regard to where they stand on issues, no ambiguities about their desire to be president. Those who want power should show us that what they desire means so much to them. The current president contested several times before he eventually won. That’s ambition. We mustn’t retrogress on that.

Does anyone want power? Let’s see the drive; come out boldly and contest with others who want the same thing. From among them, our people should decide who they believe best aggregates their view, even with regard to the emergence of a party’s standard-bearer. The keen contest we witnessed in the pre-2015 as well as in the pre-2019 presidential election for the two major political parties respectively shouldn’t be reversed. Is there Aspirant Bola Tinubu versus Vice-President Yemi Osinbajo contest yet? When I see one I shall return, still in defence of the interest of our peoples and the unity of our nation though.

Imo: When A Ruling Government Becomes the Opposition

Digital Identity and the Verity of Nigeria’s September 16 Revolution