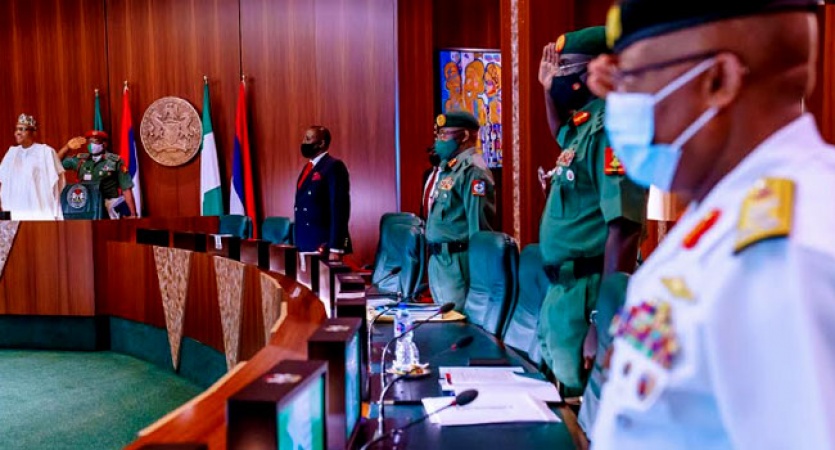 Hours after senators threatened to impeach President Muhammadu Buhari if the current security situation did not improve, the president summoned an emergency meeting of the National Security Council for today.

Senate Minority Leader, Philip Aduda (PDP, FCT), who led a walkout after Senate President Ahmad Lawan vetoed a move to debate the recent security challenges, said the lawmakers had agreed to a six weeks ultimatum on the president to address the current spate of insecurity or get impeached.

The Minister of Information and Culture, Lai Mohammed, who spoke on the lawmakers’ threat while fielding questions after the Federal Executive Council (FEC) meeting at the State House, Abuja, said the federal government was on top of the security challenge.

He thanked the senators for their concern but said the government was on top of the security situation in the country as steps were being taken to address their anxiety over the current development.

Mohammed said “Resolution passed by Senators, as rightly said, it was passed when we were deliberating, but we thank them for their patriotism and their concern, but we are working round the clock, 24 hours, to ensure that the situation is brought under control.

“I want to assure you that the president is aware of all these and as a matter of fact, I think tomorrow, there’s going to be another Security Council meeting. So, it’s not a matter the president is taking lightly and like I’ll always say, some of the measures we’re going to take are not measures that you can discuss openly here, but we’re as concerned as you are, we’re not going to abandon our responsibility.”

The minister also described as laughable and mere propaganda the threat by terrorists to kidnap President Buhari.

“As to those who have issued threats to Mr. President, I think it’s more of propaganda than anything. It’s laughable.”

It was gathered that the lawmakers took the decision to issue a six weeks ultimatum to the president at a closed-door session, which lasted for two hours during Wednesday’s sitting.

It was further learnt that the lawmakers agreed to deliberate on the resolution at the plenary after emerging from the executive session but Senate President Ahmad Lawan simply said that “Issues relating to workings of the Senate in particular and unity of Nigeria in general” were discussed and asked the Senate Leader to proceed with the items listed on the Order Paper.

This did not go down well with the opposition lawmakers, forcing them to stage a walkout of the Senate plenary, chanting “Buhari must go”.

Trouble started when the Senate Minority Leader, Philip Aduda raised a point of order, requesting the Red Chamber to give a six-week ultimatum to President Muhammadu Buhari to address the issue of insecurity or face impeachment as agreed at the closed session.

Aduda said, “Mr. President, you may wish to recall that during the closed session, we discussed the issues as they relate to security in the country and all the issues around it.

“We had also discussed that we are going to come back to plenary to discuss the efforts that have been made so far on the issue of security in the country, after which we give an ultimatum to the president that he resolves this issue, otherwise we give an impeachment notice.”

But Lawan ruled him out of order, saying that his point of order falls flat on his face since he did not discuss it with him.

Angered by the ruling, senators from opposition parties led by the Minority Leader, stormed out of the plenary, chanting songs calling on President Buhari to quit his office.

“All we are saying is, Buhari must go, Nigeria must survive,” the lawmakers chanted.

The protesting senators, including Adamu Bulkachuwa (APC, Bauchi North), later briefed reporters on what transpired at the closed-door session.

Speaking on behalf of the Senators, Aduda said their anger stemmed from the refusal of the Senate President to follow resolutions taken at the closed-door session.

“We also took into cognisance that the Senate, at various fora, at various times and various meetings, had recommended to the government steps to be taken to curb this issue of insecurity but we have realised that even Abuja is no safer.

“So, at the closed session, we agreed that we will give the president an ultimatum and if he did not comply, we will move to give an impeachment notice.

“This was our agreement at the executive session but when we came out, the Senate President refused to inform the public of our resolution.

“Since that didn’t happen, we have come here in protest to let Nigerians know that we are with them, that we are worried.

“We staged a walkout from the chambers to register that the security in Nigeria is out of hand and urgent steps need to be taken so that the issues are addressed immediately.

“We have come here to say that we have passed so many resolutions on security, we have given all the support and all the enabling appropriation that they need.”