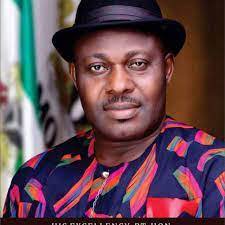 The People’s Democratic Party (PDP) in Oguta Ward A, Oguta Local Government Area of Imo State says the immediate past Deputy Governor of the State, Hon. Engr. Gerald Irona is the Pillar of the party in the Ward.

Chairman of the PDP in Oguta Ward A, Chukwuma Okoroafor, disclosed this in a Press Statement made available to newsmen in Owerri, Monday afternoon.

Okoroafor, who frowned at rumours of purported suspension of the former Deputy Governor said the names on the purported letter of suspension are not members of the Party in the Ward and therefore not known to the party.

Still speaking on the purported letter alleging that the former Deputy Governor was suspended by his Ward (Oguta Ward A), Okoroafor described the letter as fake, adding that those whose names appeared on the said letter were neither members nor known to the PDP in the Ward.

He warned that the party would deal decisively with anyone caught, wanting to bring the name of the former Deputy Governor to disrepute.

“Hon. Engr. Gerald Irona is our Pillar in Oguta Ward A. He is our Hero. We have no problems whatsoever with him. There is no pending issue whatsoever, not to talk of suspending our leading light. Those behind the fake letter are not members of the PDP. They are not known to the Party. They are being sponsored to embarrass our leader. We shall deal ruthlessly with anyone trying to bring our leader to ridicule. We do not joke with him. We call on Law Enforcement Agencies to investigate and arrest for prosecution, the source, author, and circulation of the purported letter of suspension of our cherished leader. This is criminal.”