Imo: When A Ruling Government Becomes the Opposition 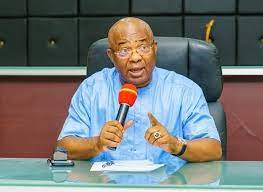 Some time ago, the government of Imo State released a cloned audio recording, a distasteful one at that, which they alleged emanated from the former Deputy Governor, Rt. Hon. Gerald Irona. They linked the audio to the harrowing security challenges in the State to drag former Governor Rt. Hon. Emeka Ihedioha and his administration into it. The idea was to create a springboard upon which to set Ihedioha on a collision course with the people of the State who, events have shown, love him dearly and who know that Ihedioha thinks good for Imo State. But this was swiftly watered down. And Gov. Hope Uzodimma and his agents must have felt agonizingly disappointed.

As a follow-up of that, a few months back, thugs hired by agents of the despotic APC government thronged Owerri, the State capital, bearing placards with inscriptions that called for the arrest of Ihedioha and other opposition leaders. Again, to bring them to public opprobrium. This was after Uzodimma had in a church service, in shocking circumstances, accused the rampaging hoodlums around the State of being selective and unfair in their dealings as they are not attacking PDP politicians. One must be terrified that the Governor, the Chief Security Officer of the State indulges in such low and helpless thought.

Disappointed that the stunt did not gain traction, the Uzodimma-led APC regime in the State recently cloned another audio recording. This time, they linked it directly to Ihedioha, purporting that the erstwhile Governor indicted himself as a sponsor of insecurity in the State. What surprises people who listened to the audio is that assuming without conceding that Ihedioha made the comment in the audio, there was nothing, to say the least, to indict or entangle him with the insecurity debacle confronting the State.

Yet, days before the audio was bandied on social media, agents of the government circulated a forged letter bearing Ihedioha’s name addressed to the Attorney General of the Federation, Mr. Abubakar Malami. In the figment of their imagination, they want the public to believe that Ihedioha wrote to question the release of the leader of the Indigenous People of Biafra (IPOB). Ihedioha of all people? No idea can be more foolish. Thank God that fraud did not fly as the public bluntly rejected it, knowing how divisive and desperate Uzodimma can be. They were further exposed by the poor grammatical construction of the letter. These series of events have left analysts across the board asking who is in charge of Imo State. Is it Uzodimma who is sitting as the Governor and reserves the responsibility to protect the lives and property of the people or Ihedioha who is just an opposition leader?

What we make of all these is that Uzodimma, despite truncating the wishes of the Imo people to emerge Governor of Imo State still leaves under Ihedioha’s shadows. He sees the Mbutu Mbaise-born administrator as the biggest threat to his already shaking political career and rightly so. It is Ihedioha who commands more respect and admiration of the vast majority of the Imo populace. And Uzodimma and all those who make up his government have been acting like an opposition.

Ihedioha may not be in the government house now, but unlike Uzodimma, he is “in charge” of the narratives. This is to the chagrin of Uzodimma, his agents and privies who are losing sleep. Every move made by Ihedioha gets them jittery because they know he is in charge. But God has turned their counsel, like that of Ahithophel, into foolishness in that they do not understand that they have chased Ihedioha’s shadows in futility so much that it would mean doing themselves a world of good to withdraw and concentrate on meaningful ways to buy the elusive legitimacy which they seek.

See also  Sagay: Northern Position on Power Rotation an Insult To The South

Imo is in dire need of leadership, but Uzodimma and his henchmen do not care. Even if the State has to sink twenty feet below under insecurity bombardments, they prefer to drink champagne and laugh out loud. The only thing they know how to do is to point accusing fingers at innocent people for their failure. Some months ago, when the battle for the soul of Imo APC was hot, Uzodimma turned to Okorocha and his son-in-law Uche Nwosu who contended with him. They arrested Nwosu during a thanksgiving mass in honour of his late mother and told the public that it was in connection with insecurity in Imo State, and that was it. No one has heard the outcome of the DSS investigation on the matter as it becomes clear that Uzodimma uses the insecurity his leadership ineptitude created to witch-hunt supposed political foes.

The latest show of shame is the press conference by the Orlu Political Consultative Assembly (OPOCA) calling for the arrest of Ihedioha, a joke in every sense of it. Shamefully, OPOCA peopled by APC politicians and Uzodimma’s lackeys have become the Governor’s propaganda and attack machinery. Imo people have discarded them long ago. And Gov. Emeka Ihedioha, being in charge as the beautiful bride of Imo politics and getting ready to return to Douglas House to fulfill his promise of good governance to Imo people, still shines like a million stars, as Uzodimma and his camp remain the dogs that bark while the caravan goes by.

See also  ‘Blackmail’: Why We’ve Not Made Headway On Samuel Ogundipe’s Case – EFCC