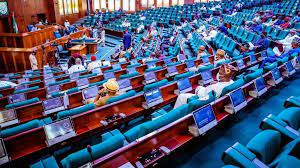 …may prevail on apex bank to reverse decision

Angry with the N100,000 weekly cash withdrawal limits recently set by the Central Bank of Nigeria (CBN) and its attendant economic and social challenges, the House of Representatives at Thursday plenary asked the Governor, Mr. Godwin Emefiele to suspend implementation of the policy.

Emefiele was asked to cause an appearance Thursday next week to explain to the House on the impact and significance of the new policy.

The suspension is to last pending the outcome of the expected engagement with the House on the compliance with the relevant sections of the CBN act and the 1999 constitution on the monetary policies of the apex bank.

The resolution was sequel to a motion under matters of urgent public importance moved by Hon. Magaji Dau Aliyu.

Apart from the minority leader, Hon. Ndudi Elumelu who supported the CBN policy in that it will curb banditry and reduce the incidence of corruption, many other lawmakers who spoke, vehemently condemned the decision of the CBN.

The opposition may eventually signpost a directive by the House by a way of resolution to drop the policy after the Wednesday meeting.

Midway into the proceedings, Hon. Mark Gbillah raised a point of order, citing relevant sections of the CBN act and the 1999 constitution, reminding the House that the CBN governor ought to be giving periodic briefings on monetary policies of the apex bank to the national assembly.

He noted that the CBN was yet to explain to Nigerians how the redesigning of the Naira was funded, stressing that there was no approval of such expenditures by the national assembly.

To that end, the Speaker, Rep. Femi Gbajabiamila who felt convinced after confirming from some members of the relevant Committees of the House on the absence of Emefiele for the briefings relied on the sections of the laws so quoted to sustain the point of order.

He eventually heeded to the prayer of the substantive motion and ruled that Emefiele be summoned to brief the House next week.