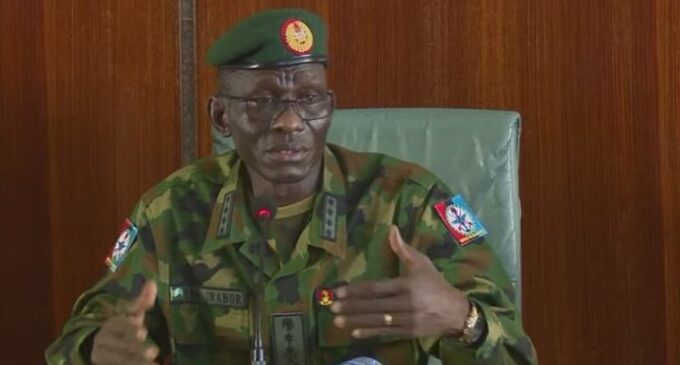 Lucky Irabor, chief of defence staff, says the military will resist pressure to compromise the 2023 elections.

The defence chief said the military will remain neutral and assist the police in monitoring and securing the process.

The defence chief maintained that the military is apolitical, noting that necessary measures are being put in place to ensure that they obey President Muhammadu Buhari’s directive to maintain neutrality.

He said the personnel are being trained to be more professional while rules of engagement before, during and after the elections have been codified and distributed to them.

“Of course, there will always be pressure from all quarters, wanting to induce security forces, not just the military, the security force the police. And that’s what criminal enterprise is all about,” he said.

“That is what something that is wrong is all about. But what makes the difference is the professional approach to dealing with those issues. And that’s what the military we are committed to doing.

“Now, the reason why we have ramped up our training in that regard, sensitization, a lot of engagement across, you know, the formations and units is being undertaken. And then more so to no articulate code of conduct for all our personnel, which has been done and distributed.

“So what, why should they act before, during and after the elections, these are being codified in the SOP that have been issued to them. So it remains the duty of the commanders to ensure that the directive, as indicated, and the contents of the SOP is adhered to by every personnel in the armed forces.”

The defence chief also spoke of the key achievements of the military in the effort to keep the country safe including more recruitment into all branches of the security services, routing of insurgency and banditry as well as curtailing oil theft.

Irabor noted that over 300,000 people have been freed from abductors since 2014 while refugees who fled the north-east due to the insurgency have started to return.

The CDS also said that former insurgents currently under training will graduate in February 2023.